Contrary to a popular misunderstanding. Law is not boring. The history of ideas is full of exiting projects based on laws. Starting with the foundation of empiricism, i.e. the comparison of laws governing the different Greek city states pioneered by Aristotle. Considering law from the perspective of legislation gives it an actionable touch and makes it more exciting to many persons. Contrary to a static perception of law, laws can be changed and are subject to interpretation continuously by courts and judges. The fascination with law might start with the philosophers of the French enlightenment like Montesquieu. “De l’esprit des lois” – explains already the need to look behind the literal text of law. What is the spirit of law, becomes the driving question. Not only the categories of countries like republic, monarchy and despotism were argued by him, but also the separation of powers into an executive, legislative and judicial power is his original contribution. These principles govern the German “Grundgesetz” and are a common understanding of the founding states of the European Union as well as a potential breaking point.
A sociological perspective on law is formulated by Niklas Luhmann (short intro in D) and highlights the danger of laws as a self-referential system. This dominated by experts who develop the system further independent of the concerns and understandings of wider society. In order to understand this concern, it is probably useful to think of climate change as an urgent problem. Bio-diversity has for much too long not been of much relevance for legal founding principles of our constitutions. In the same vein, women judges or diversity in the legal profession is a point of concern. Majorities versus minority rights create intrinsic tensions in law, legislation, execution and interpretation. Analysing the half-life of laws is interesting, i.e. how fast do they really change or get abandoned altogether. Equality in front of the law remains a thorny issue. It is a huge issue when moving from law to justice as primary concern. The most interesting point is the view of law as a changing matter, hopefully for the better, but this is another question altogether. Reveillons-nous l’esprit des lois ! (pas seulement au Reveillon). 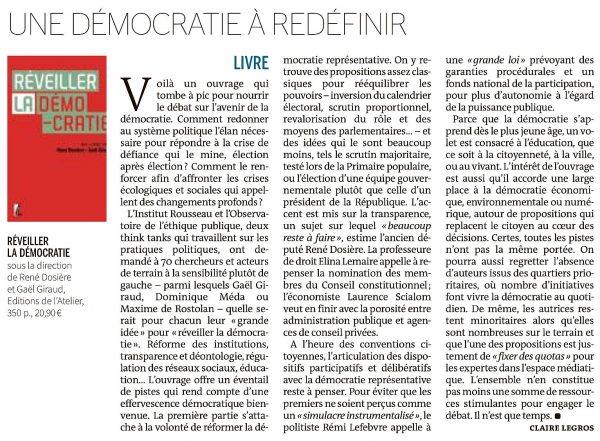