It is 10 years after the publication of a Ph.D. thesis on “Corruption: a violation of human rights and a crime under international law?” by Martine Boersma that at the top level of the European Parliament and the International Trade Union Congress the smell of corruption is investigated by police and judges. Following “Qatargate” (Radio France Link) this means that the persons accused of corruption, forming a criminal group and money laundering have changed their lobbying in return for accepting cash. Exploitation of workers and more than 100 deaths in Qatar was the result, due to the heat when building the stadiums for the Football World Cup which took place in 2022. Following the recommendations of Boersma corruption in this respect can be interpreted as these persons contributing to and being guilty of abusing their political positions to silence criticism and whistle-blowers, and the right for defendants to a fair trial for example. The advocacy to counter corruption with developing international human rights legislation and persecution in this respect is dearly needed now. “This line of reasoning transforms a corrupt act into a possible starting point for legal action, be it at the national level, …, or at the international level by submitting a complaint to a regional or global human rights monitoring body.” (Boersma, 2012 p.376) The International Criminal Court or “alternative such as the establishment of a permanent anti-corruption court, or anti-corruption commission to monitor compliance with the UN Convention Against Corruption should be kept in mind, as well as the possibility of setting up ad hoc anti-corruption tribunals” (p.380). Not much to add to this, act now, before the practice spreads.
Francesco Merloni wrote in his book (2019, p.132) on corruption with Italy in comparative perspective: “when corruption is defined in its wider meaning of maladministration, we are looking at a mass phenomenon which is “sub-criminal”, yet nonetheless with strongly negative implications for the efficiency and effectiveness of public administration and democracy in general.” The practice of excessive salaries of the Italian parliament (p.131) is mentioned in the list of case histories of corruption just like the international event of the EXPO 2015 in Milano with huge construction projects (LeMonde on Panzeri l’ex-eurodéputé). Learning from case studies is best practice in many business schools and probably beyond. Finally, attention should be drawn to prevention of corruption. Here the reading of Corruption and Anti-corruption by Larmour and Wolanin (2001, p.235) offers good advice. The micro-economics of corruption (pp. 119) states for example that “If expected penalties are sufficiently high, bribery is deterred” (p.126). Equally the real threat of a full and explicit audit of operations, promotions and financial transactions might deter corrupt activities. Most importantly the authors state, “the social networks approach to corruption allows the corruption investigator to conceptualise the operation of corrupt networks in terms of power flows and relationships rather than the attributes of actors. The question to be asked by the corruption investigator is not whether actor A is corrupt. The question should be, what is the relationship between actor A and other potentially corrupt actors in the network.” Re-reading some classics of sociology like Max Weber on bureaucracy, but also James Coleman’s foundation of social theory provide basics for understanding social interaction when things go fundamentally in the wrong direction. We might even need to use artificial intelligence to detect corruptive practices to shield and support the trade union movement. 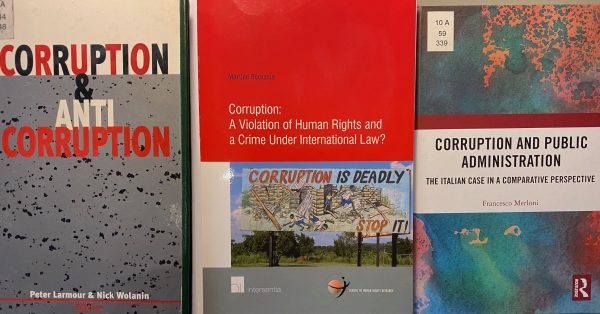