We are all full of imagination. The human brain hardly can do without it. It could be understood as if thinking of oneself is a continuous process of imagining and reimagining oneself. We just developed or were forced to suppress imagination at various instances throughout our lives. Day dreams are rarely tolerated, starting at school, then on the job and probably for a long time also about the way we imagine our own ending or life after death. Just trying not to think, like in meditation, seems to be a very hard exercise and it demands long practice to arrive at longer durations. Abstraction is one of the ways of art to allow imagination to rule the process of creation. In view of the anniversary of Pablo Picasso in 2023, the Brussels Royal museum of fine arts 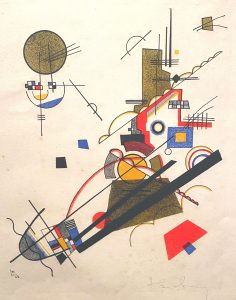 is presenting a paedagogic reflection and demonstration how Picasso emerged on his way towards abstraction as his preferred way of imagination and reimagination as part of the realisation process of his art work. As part of the Cubist revolution Picasso is quoted in this exhibition on how he paints: “Je ne peins pas ce que je vois, je peins ce que je pense.” and “Chez moi, un tableau est une somme de destructions.” Nice imagination, reimagination and de-construction I would say. Like the imagination depicted above from Paul Klee reflects the accomplishment of a new form of pictural language. Try imagination, it isn’t hard to do, “John Lennon” sang once. In Brussels you can try seeing the cubist way in the Picasso exhibition, a good way to prepare yourself for the next visits of fabulous exhibitions in honor of Picasso in 2023.

2 Replies to “I for Imagination”