Syntax is just one of the categories of linguistics. Carl Lee Baker (1989) wrote a whole book 500 pages on just English syntax, can you imagine. I like his modesty in the introduction stating that English syntax is just a subfield of linguistics (p.12). Other languages have different structures, some might be very different from our ways to communicate even. The ways how animals or plants communicate is an exciting subfield of linguistics, psychology and biology (Carrie Fidgor, Pieces of Mind). The SPO structure of sentences is only one simple way of constructing sentences. Syntax is much more complex. The sociological aspect of linguistics and syntax lies in the “acceptability judgements”, which are present once we establish rules and sort phrases into correct or incorrect sentence structures. Norms and standardisation as well as authority to decide on correctness becomes an issue. Countries used to many dialects or multilingual populations are confronted with these issues on a daily basis. Linguistics as basis of communication is continuously present even in the mental structure. Bilingualism, tri-lingualism and their effects on minds, competences, behaviour, culture and societies are own thriving research fields. Building a sentence or a phrase, following Baker, is built around a head and their complements. Such minimal phrases are comparable to what we coin in a simplified manner the subject-predicate-object structure of a sentence. The definition of the nucleus of the structure of a sentence is also about conventions and acceptability. Staccato speech and rap-music are examples of forms of speech, which are often considered beyond the normal. Computer voices are becoming more normal as we are faced with chat bots all around us now. The image below reflects the simplified “representation of syntactic structure” (p.48 The Cambridge grammar of the English language 2002 review here). To play around with “Clause”, let us analyse the clause: I bought a shirt; I wonder what I bought. You know what I mean Klaus, it is a clause, or is it Dady gone gaga = DADA? 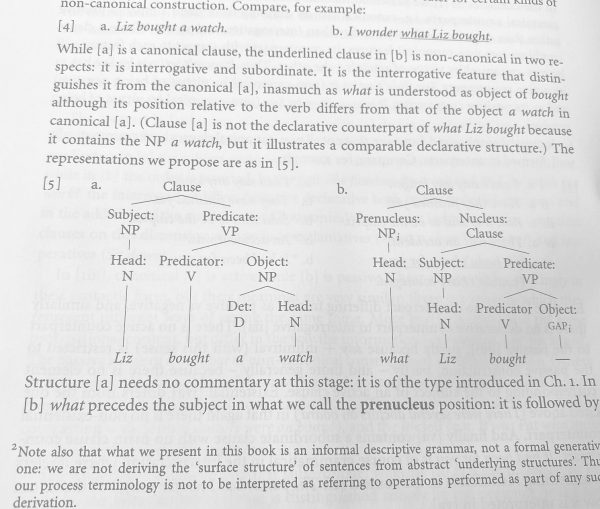