New research on the fabrication of writing allows to debunk some of the received ideas about writers as living and drafting in a solitary space. However, the facts frequently show something different. In the journal of the BnF (images 2022), (Chroniques des la BnF Nr. 95 p.9 pdf-file) the BnF makes transparent the creative cosmos of Marcel Proust (Exhibition closed). From correspondence and other influential images, we learn about the “fabrique de l’oeuvre”. Far from writing his books from front to end in a linear fashion, Proust drafts “isolated sequences which he mounts, demounts and regroups sometimes even years later. These clippings of text are arranged by him like a patchwork, a collage rather than following a linear progression. Just peeping into the writer’s studio, drafting style and “paperoles” is fascinating. What a mess, some would say. What a huge imaginative space he has been living in, despite being reported to draft most of his work while actually being in his bed (Lire Magazine 12-2022). Beds are not always for sleeping, only. Today’s start-up enterprises frequently start from home, a century ago Proust demonstrated a lot can result from a very tiny physical space, but an enormous space in mind. 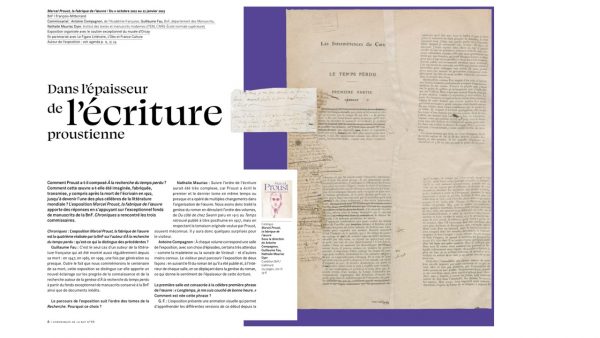