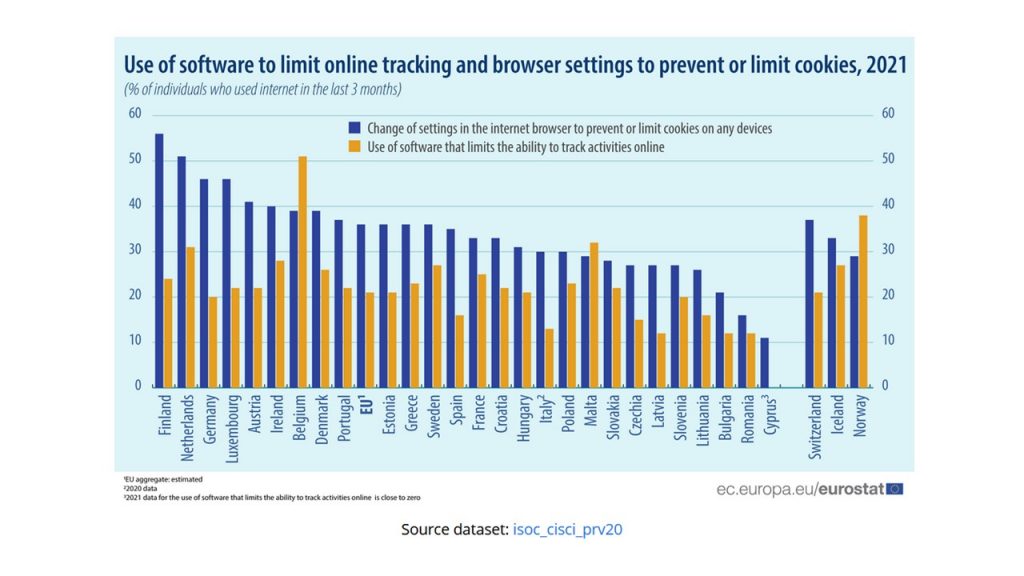 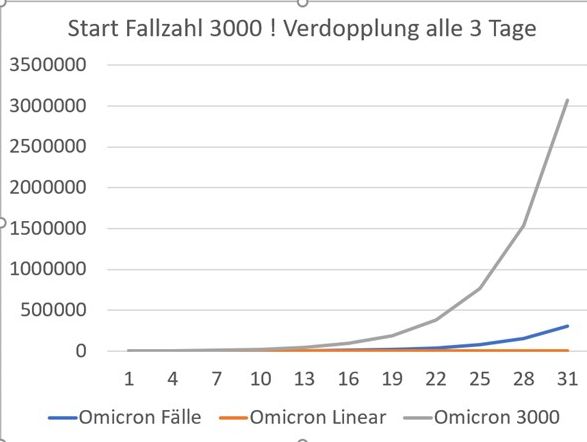 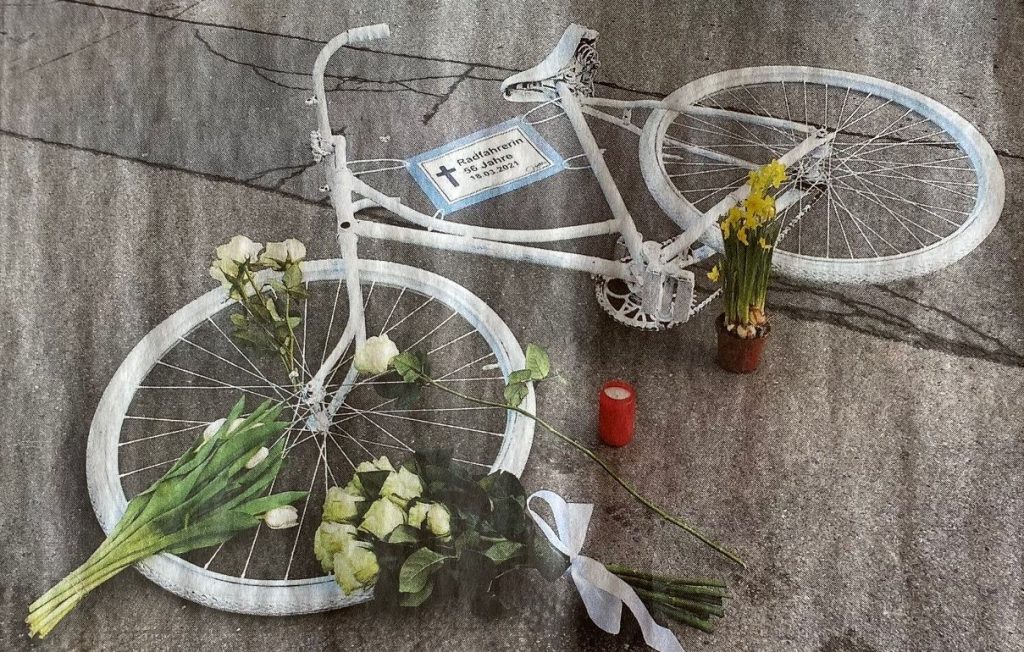 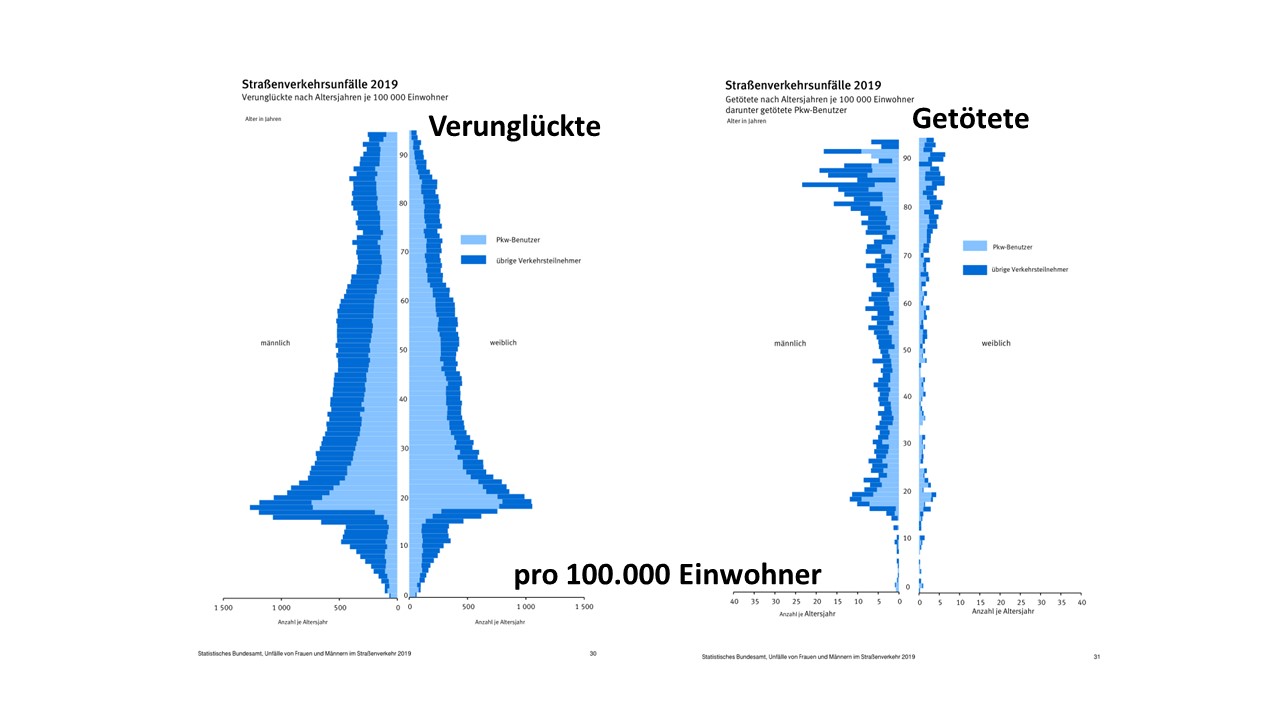 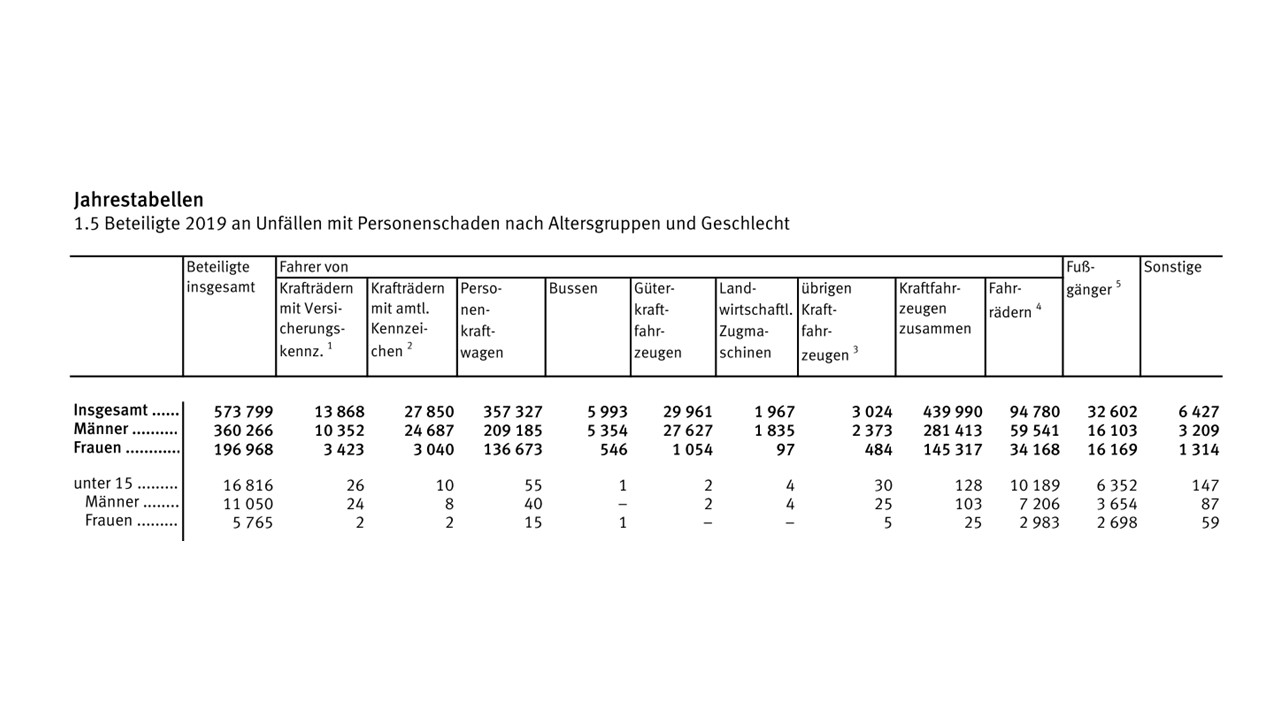 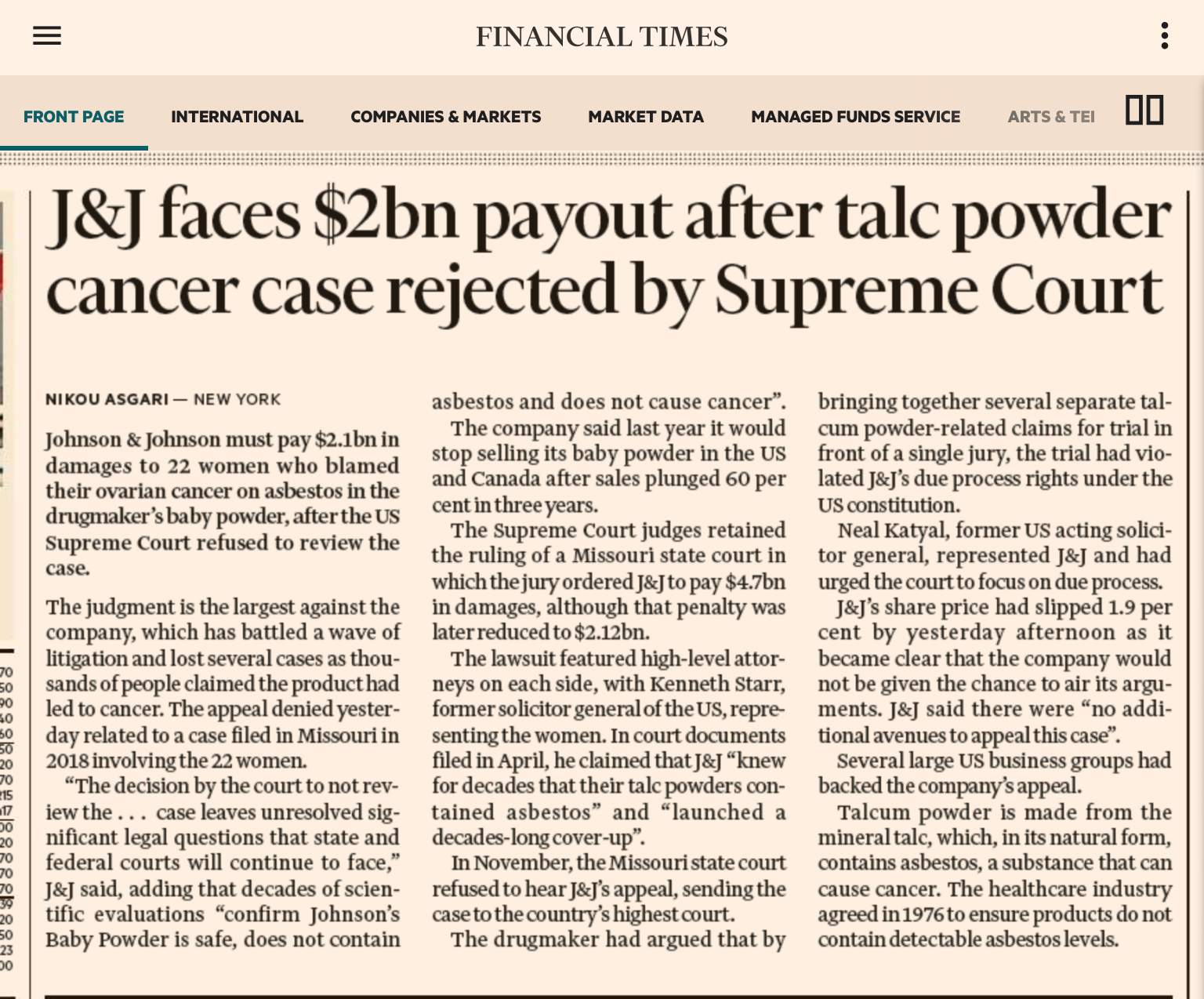 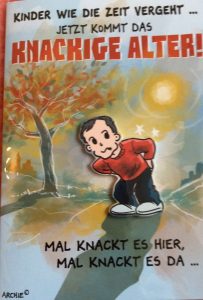 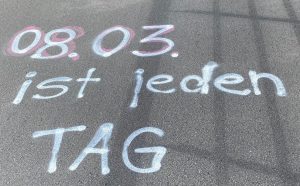 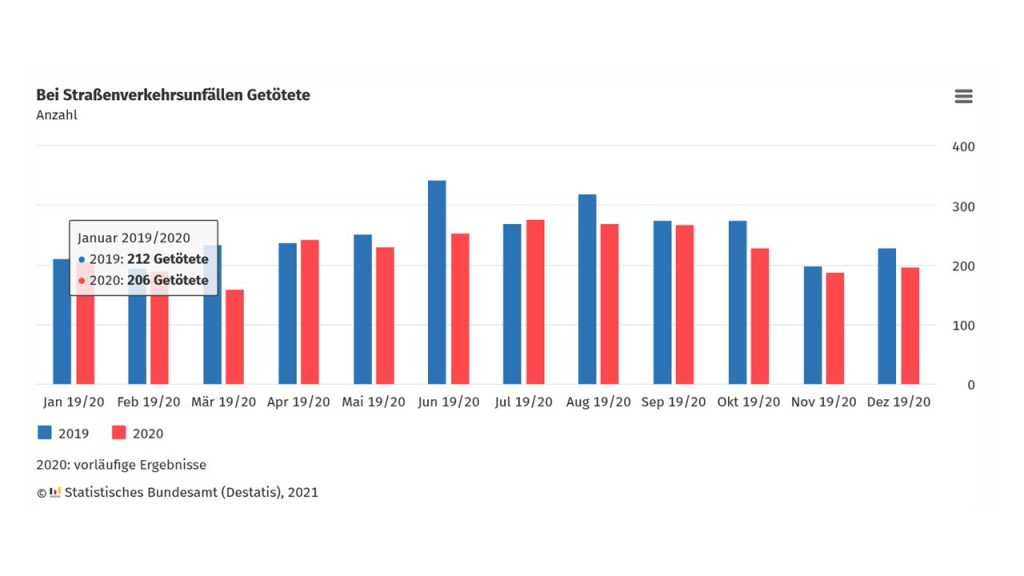 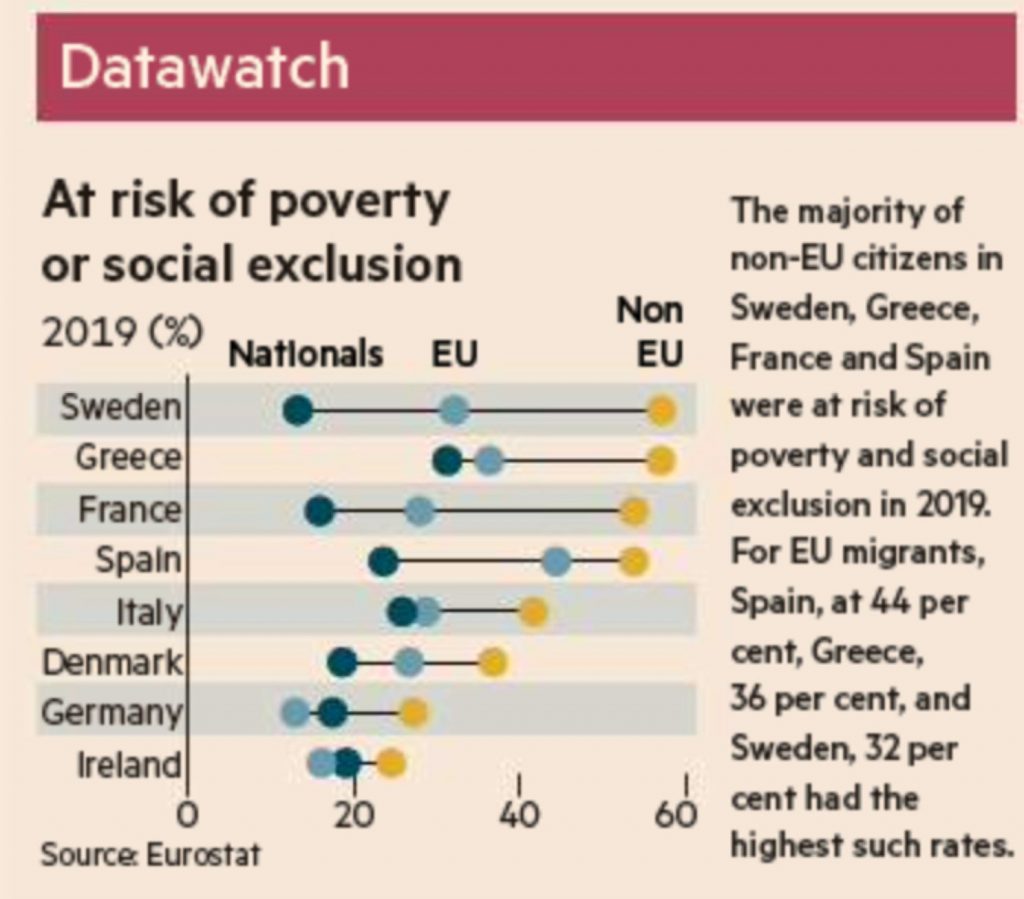 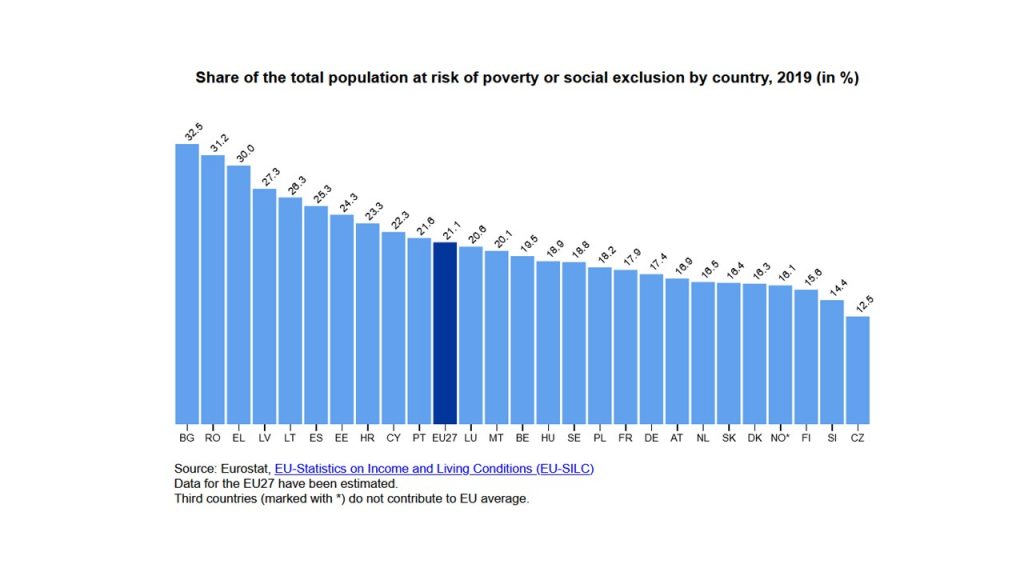 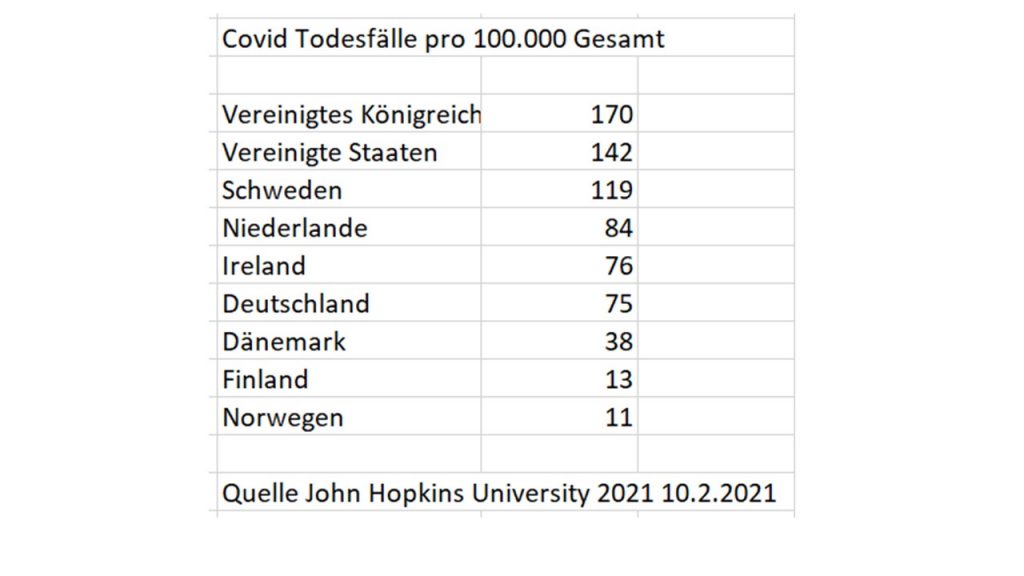 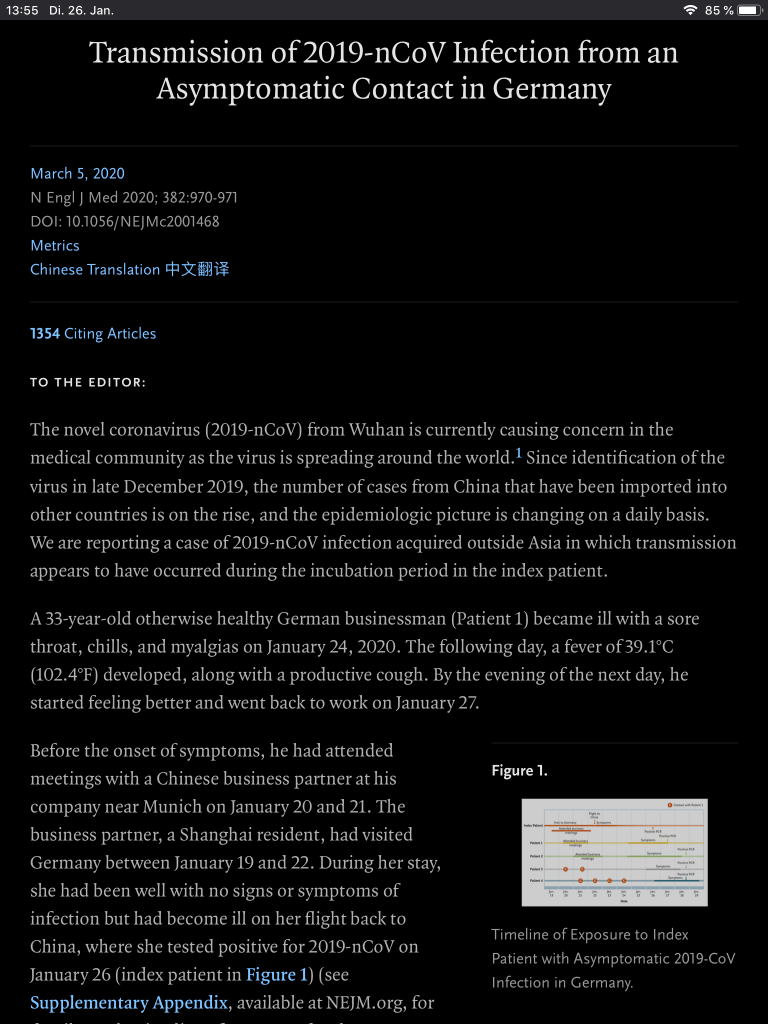 On 26th of November 2020, in the middle of COVID-19 health care desaster the UK is announcing a horrific budget deficit for 2020. Apparently, this is the largest for more than 100 years. The costs of bad choices in several votes (BREXIT, Parliament, Prime Minister) can be calculated in billions of pounds now. The younger generations pay a particularly high price. Cut of from Europe, job losses due to covid-19 and then the huge debt burden … and this despite the fact that they voted in a majority to stay in the EU. Very unlucky!  As Germany was the sick man of Europe with high deficit and high unemployment I continued my studies in the UK, maybe youth in the UK could take advantage of migrating in numbers to Europe. Sometimes this is the only fact stubborn governments will listen to. So,”get on your bike” across the channel this time. A famous quote from Michael Heseltine to solve the unemployment of youth in the early 1990. 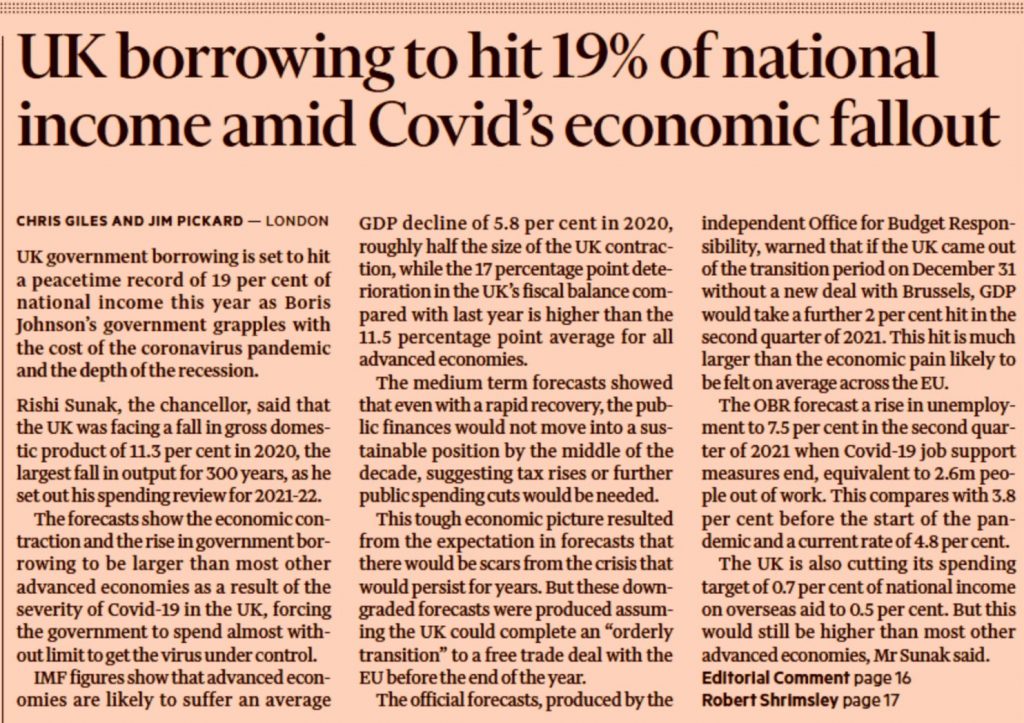 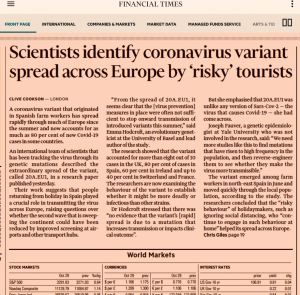 With almost 6 months into COVID-19 in the USA since the first official case, the public health situation is still scary. Data and figures from the official U.S. Department of Health & Human Services, particularly the recent data release from the Centers for Disease Control and Prevention show around 50.000 new cases of Covid-19 every day again (see figure). 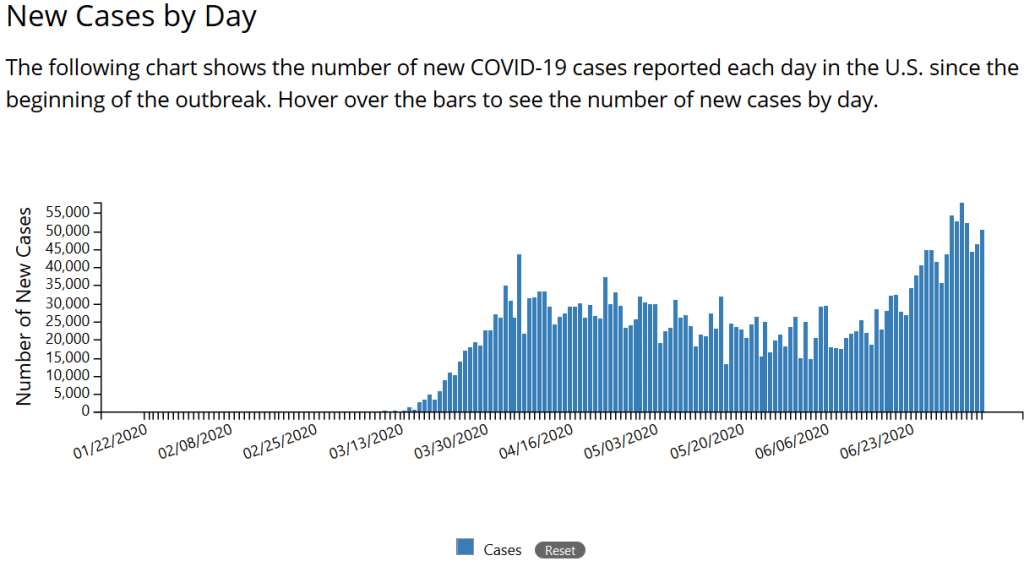 By using the data and calculating a simple linear trend shows the following evolution in case no policy change occurs. 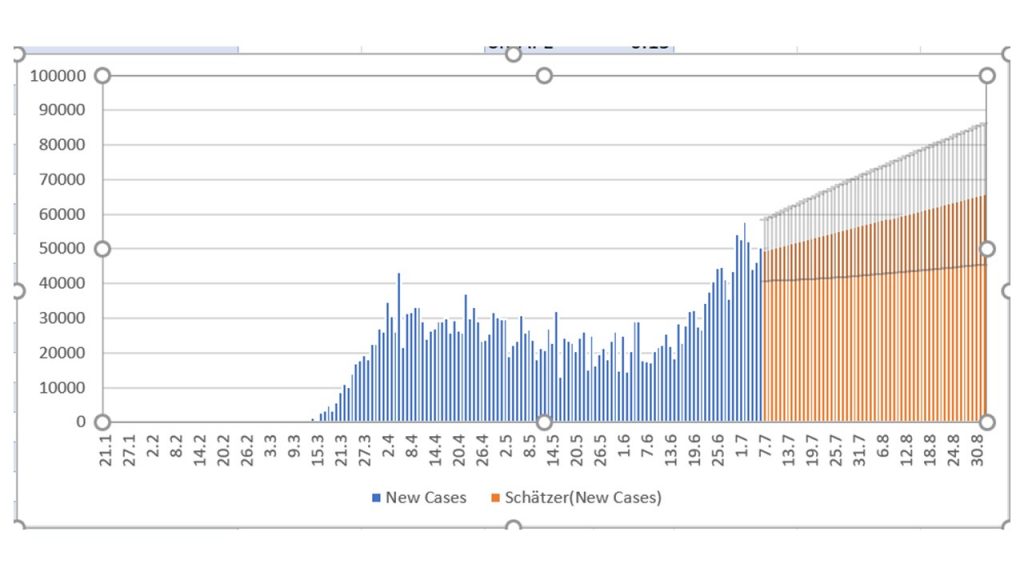 Using a seasonality in the calculation of about 3 weeks (=20days) the evolution looks much different with huge margins of error. 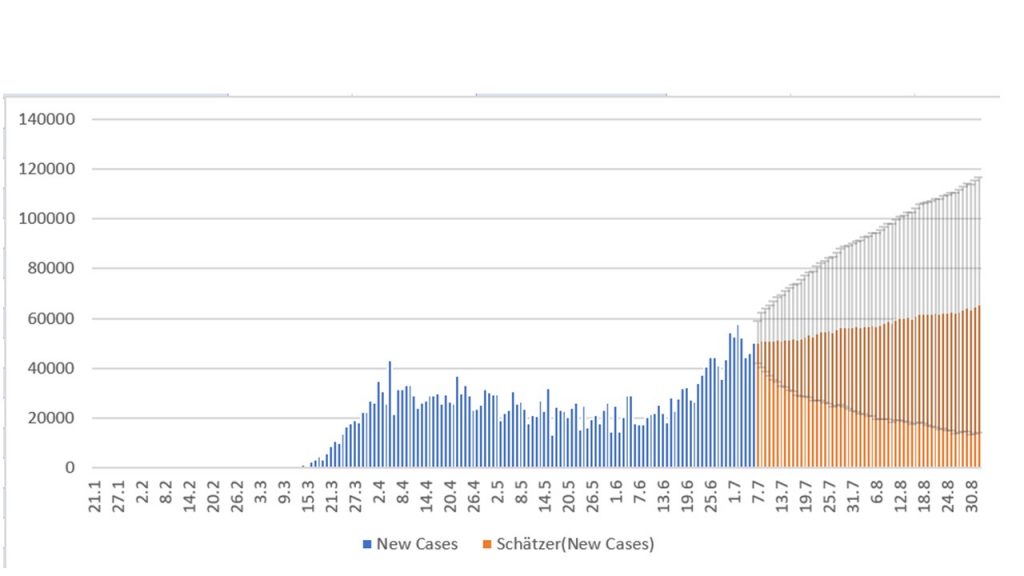 Hence, all is possible by chart analysis or the language of investors. Public health analysts would rather look at the disaggregated state by state or even county be county detailed analysis. A seasonality of 3 weeks could make sense. With a high level Covid-19 cases in one state people move (also with Covid-19) to other states for one week exporting the virus. After 2 more weeks incubation, case numbers rise in this receiving area, which will make visitors (and the virus) move back again. A oscilating pattern of the spread of the virus will result, making a nationwide lockdown much more likely. In natural sciences (Video-Link)we call this coupled oscillation, here of Covid-19 between several US-states. (take Florida and New York for example).
Now, let us apply the same simple statistical modelling to the international level. As we enjoy Summer in Europe , in the southern hemisphere of the world Winter, Covid-19 and the flu are spreading there now. When we shall move from Autumn to Winter, we might receive another wave of cases from the other part of the world.
Conclusion: Get prepared for another wave as of now. Helping the global South now, saves lives in Autumn and Winter also in Europe. Simple isn’t it. Let’s just act accordingly (the not so simple part). Train health care professionals (95.000 of them got infected in the US and 500 !!! died).

In times of live or die questions, country comparisons are informative. It is the time to endorse, again and again, complete transparency to facilitate learning across borders (see recently The Guardian 13.5.2020). China has not been very transparent at the onset of the Covid-19 pandemia. Other countries should not follow this track in terms of lack transparency. This appies equally to transparency of hospital and care professionals doing amazing jobs in these critical times. No doubt about this. In order to learn about the need for qualified employees in this crisis, I recommend the full thread of the tweets from “Mary Poppins” on what it means to administer a respiratory machine to a patient.

The experience needed, the understanding of medical processes are only part of the story. Stress, mental overload, burn-out due to long-term shift-work and irregular working hours including frequent (unpaid?) overtime and lack of sufficient training may cause more fatalities than would otherwise be the case. Teamwork across shifts and weekends has to be effectively coordinated. Medication profiles need to updated and understood for adequate application from all team members not only the medical doctor or shift supervisor. In emergency situations panic control mechanism also are relevent features that have to be learned and experienced. In a previous analysis of data from 18.000 nurses in Canada we could provide evidence of the importance of some of these measures. Transparency is key. Cover-ups of past failures cost dearly in this global pandemia.  Full paper.
http://www.ccsenet.org/journal/index.php/gjhs/article/view/0/38574 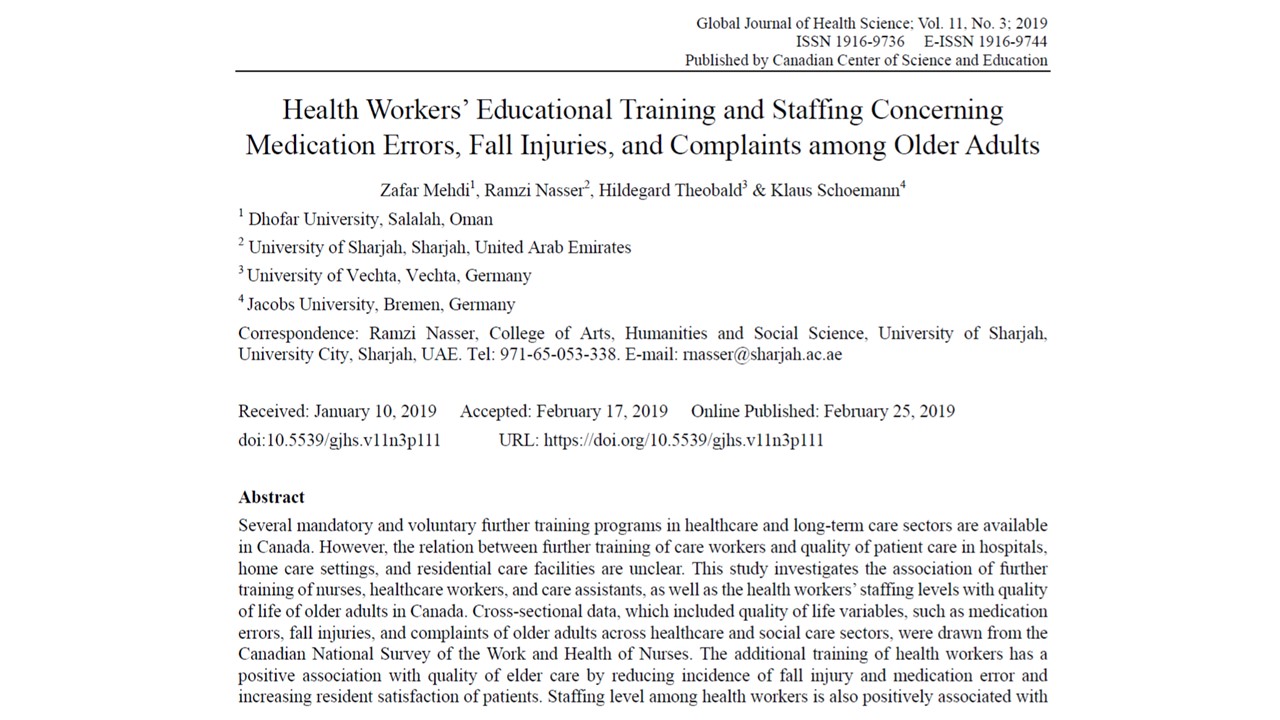 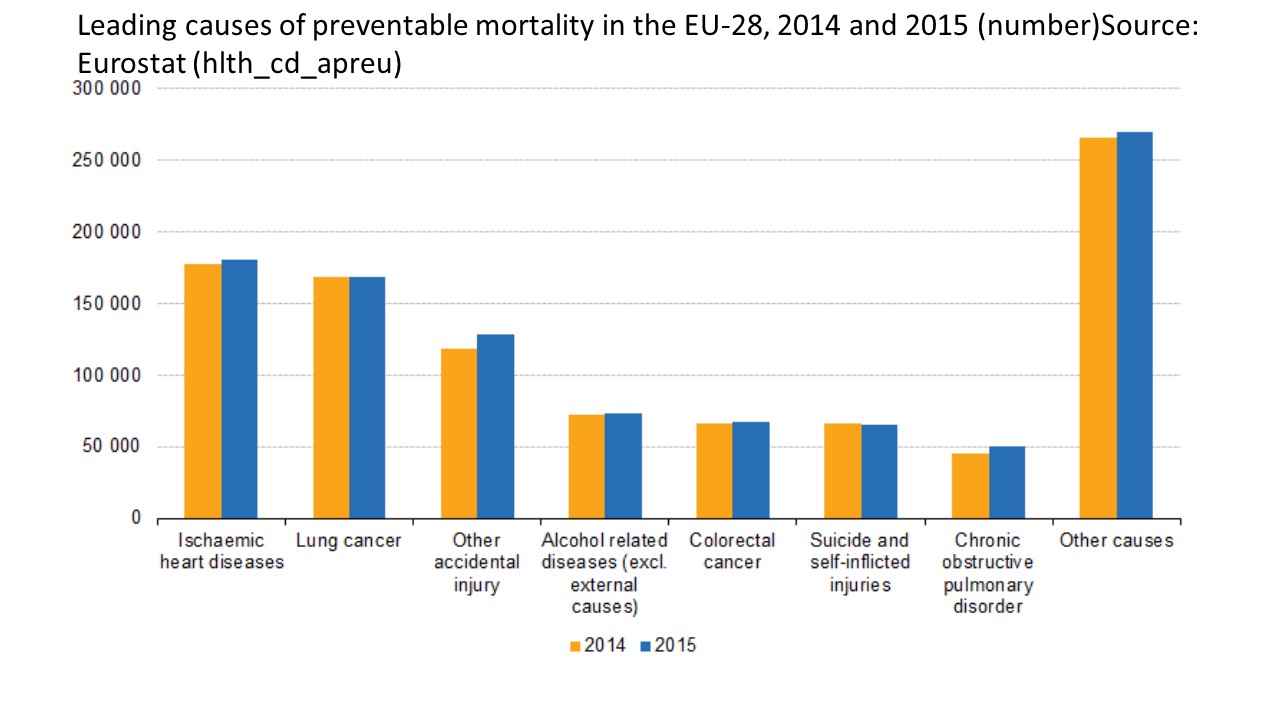 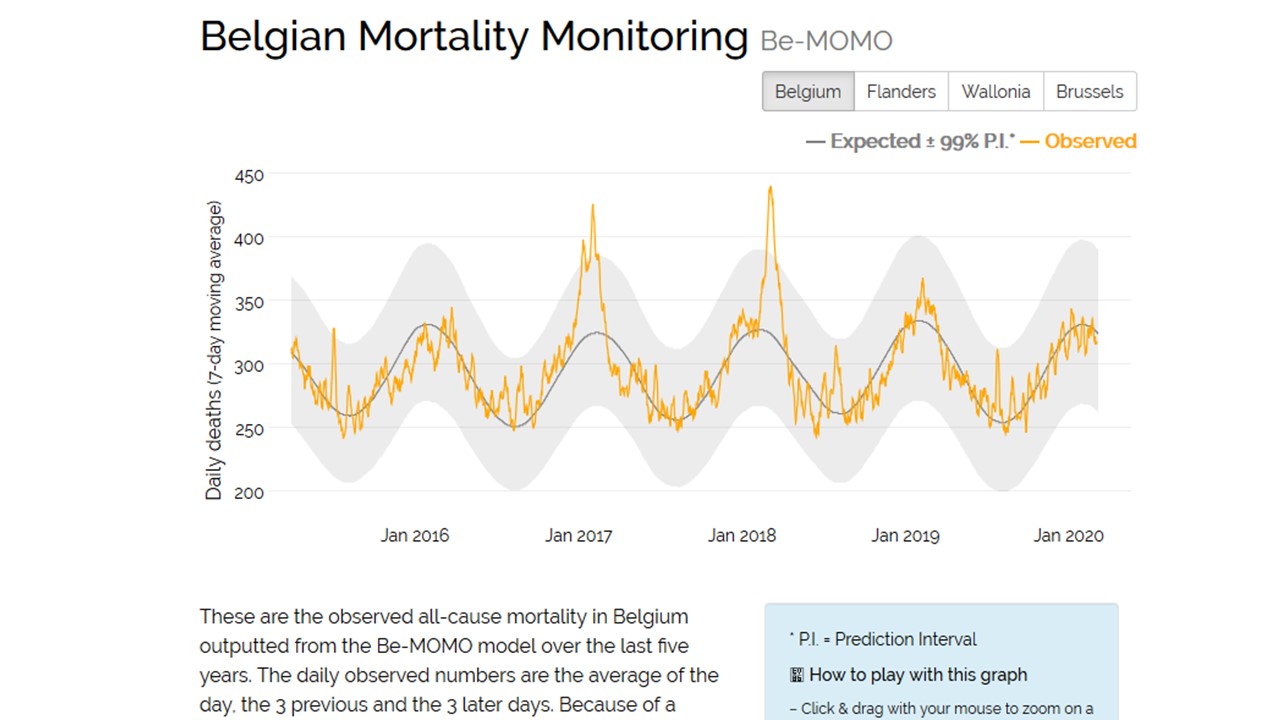 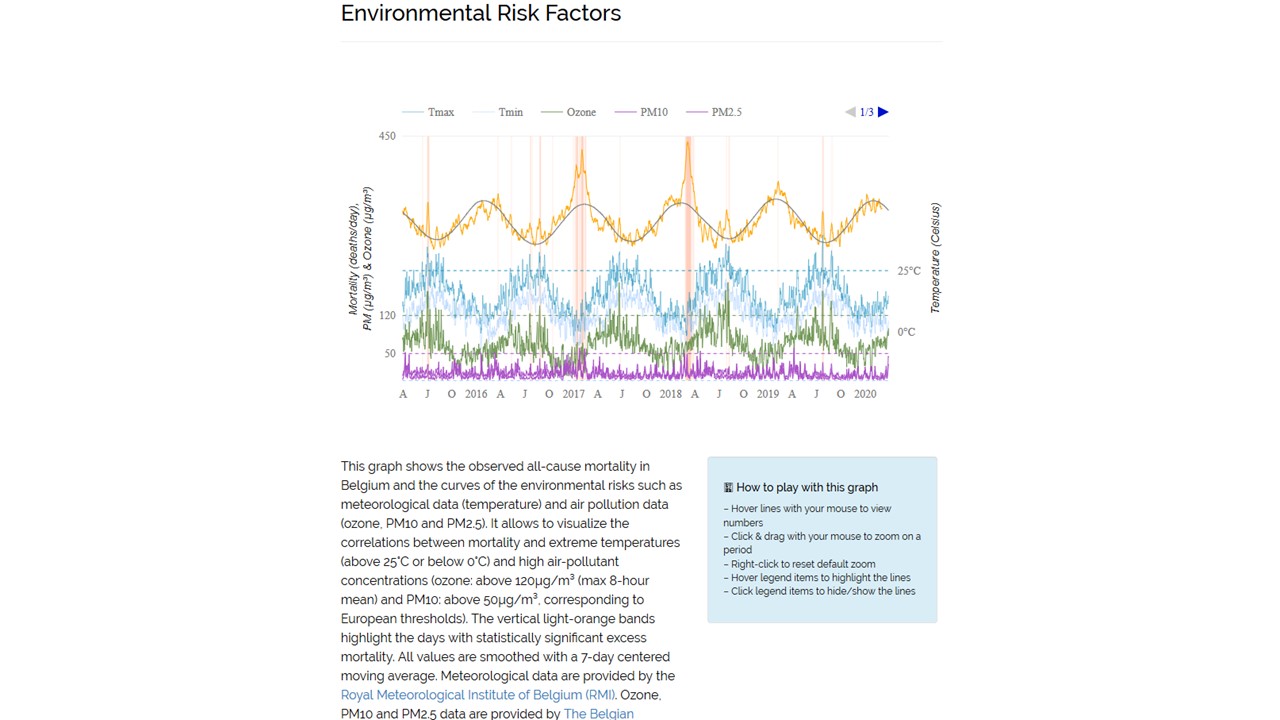 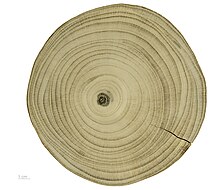 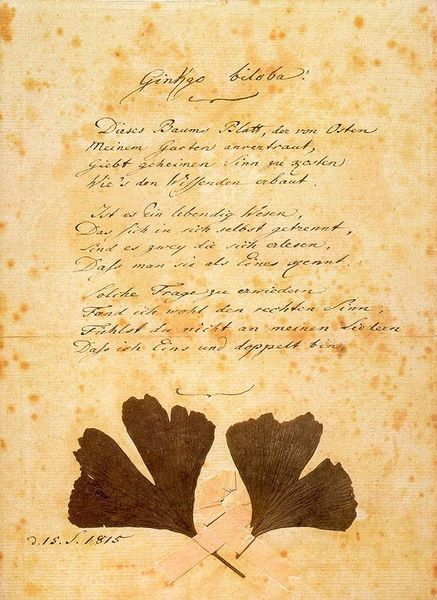 The 346 persons who died in crashes of the fairly new airplanes of Boeing 737 Max have nothing to gain from the ex-post evaluation of the crash. The journal “Scientific American” published an interview with a former Boeing employee who puts a relationship of the two crashes into doubt. The article in the online version of the 13th of March by Mrs. Gohd is full of stereotypes rather than scientific information. This puts science or science journalism into a bad light. Please read for yourself (Link here).
Let’s wait for the black box to be read! and then judge, but not wait for further casualties please. The “precautionary principle“, to protect persons from harm for example by introducing not suffienctly testes new technology, makes a lot of sense in the aviation industry. That’s why the EU might be slower in the adoption of some innovations, but is more likely to avoid fatal accidents as a consequence of hasty innovation. 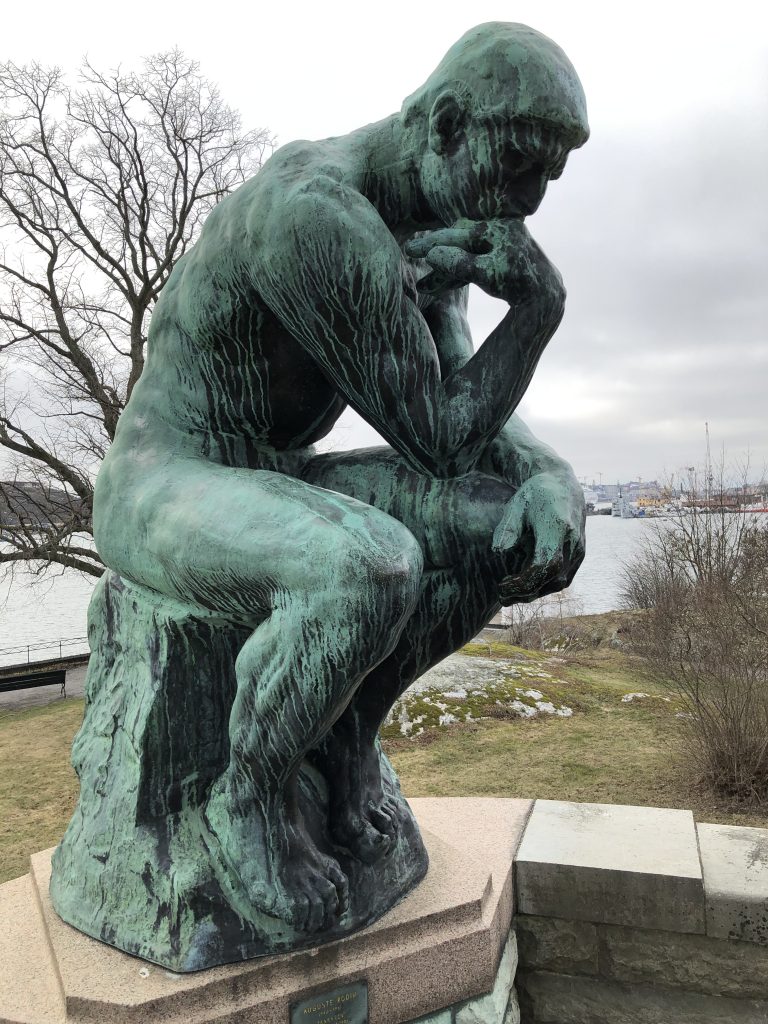 Rodin’s famous sculpture sums up the need and grief to think twice before you act. Mourning of the dead due to neglect of sufficient thought prior to action included. At least, this is  my modern interpretation of this piece of art with respect to responsibility and the precautionary principle.
(Foto taken in Stockholm, Prince Eugen’s Waldemarsudde  art museum).

Some surveys in the social sciences remain a reference due to their interesting scope of questions included. The Canadian National Survey of the Work and Health of Nurses is such a survey since they “dared” to ask a representative sample of 18.000 nurses, health care workers and care assistants questions including medication errors, fall injuries, and complaints of older adults in Canada. The study by Zafar Mehdi, Ramzi Nasser, Hildegard Theobald and myself reveals the importance of further training and sufficient staffing to prevent medication errors, fall injuries and other complaints of patients. DOI: 10.5539/gjhs.v11n3p111

Besides the interesting results of this study based on a little used data set, the study should encourage and reward transparency of medical practices and analyses (relevant in #Covid-19). Hopefully many other studies, ideally with longitudinal designs, will build on this interesting kind of data collection. Evidence-based human resource policies should not stop in front of hospitals and care institutions. Unfortunately, such sensitive data are still rarely collected, although conclusions are helpful for nurses, patients and society as a whole.

The Link to the paper in the Global Journal of Health Sciences and the download is free of charge here.  For science policy it is interesting to notice that the paper was part of a self-financed Ph.D. of Zafar Mehdi, accepted at the University of Vechta recently.

7 years on from the Fukushima disaster promising research from a team including Physics Professor Thomas Heine reports that Cu(I)-MFU-4l is a material that “could significantly enhance our ability to treat radioactive waste”. The original paper appeared recently in Nature Communications LINK .

3He and tritium which are used as fuel in fusion reactor technology are produced at the same time. The battle about the energy provision of the future is still on. My teaching and research on “Society and Technology” takes on such challenges. The “Open Society” needs “open science and technology” to advance on major challenges. Open access is also part of this process. This is surely a nice additional topic for the University Study Course “Society and Technology” Thomas Heine and myself taught when we were both at Jacobs Universtiy Bremen.